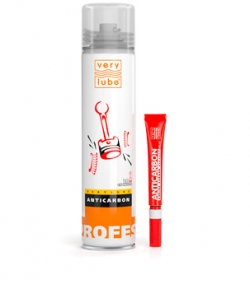 Anticarbon treatment is a rather simple procedure that helps to remove carbon from engine cylinders. Such deposits are formed when oil penetrates the combustion chamber. Carbon deposits block piston rings in undercut grooves. As a result those don’t fit tight to cylinder walls and remove not all the oil film. Excess of lubricant is burnt and forms carbon. Eventually this process reaches its maximum: engine starts to smoke, consumes oil, its power decreases.

It usually occurs when the car is used for short-time drives, especially in winter. In such a case engine can’t simply warm up to its operating temperature range by which the combustion chamber cleans itself. Carbon deposits formation is also caused by: driving by low rpm, long idle operation, e.g. in traffic jams, engine overheating; delayed oil change.

Engine consuming too much oil and fuel, and dark smoke coming from the exhaust silencer are the first signs of piston ring sticking. One can decisively diagnose the problem by measuring compression in cylinders. Compression decrease by several units, different compression level in cylinders point at problems with cylinder-piston group. In such a case most technicians would advise to effect major engine overhaul. However, a rule of thumb shows that less cardinal measures can also be effective. There are two types of compounds for anticarbon treatment: some are added to oil (let’s call them “soft” ones), other are applied directly to cylinders. Compounds of each type have their advantages and disadvantages.

“Soft” anticarbon treatment compounds are added to engine oil 150-200 km before oil change. Lacquers and carbon are washed off the parts, especially pistons and lower wiper rings, which get stuck most often, by normal engine operation mode. Such compounds are surely less efficient by severe contaminations, so they should be applied more often, maybe even by each oil change as anticarbon preventive compounds.

Compounds applied directly to cylinders are considered more efficient. For this purpose engine is warmed up, plugs are unscrewed, and the necessary amount of anticarbon compound is applied to each cylinder through spark plug well. Then the combustion chamber is closed with plugs and the process begins. The applied automobile chemical compound emolliates carbon on pistons and rings well and liquid also starts to evaporate due to high temperature of the warmed up engine. Vapor goes up the combustion chamber, affects carbon on pistons and cylinder walls, and emolliates it. Afterwards all dirt is burnt and comes out with exhaust gases. Besides, there is no need to change oil after application of such compounds.

The major advantages of anticarbon treatment compounds are their low price, if compared with a price for major engine overhaul, and effect that often becomes overwhelming.